It seems like once or twice a year we get word of one of these country-relevant movies coming down the pike, but then we have to wait with bated breath for what seems like forever for the actual release because the movie makers must muck through the process of finding the right distribution channels. When the flicks are finally released, we tend to find out why such unfortunate delays belabored the release process, because despite strong casts and the best intentions, the small budget reveals itself in a less than appealing final product. Such seemed to be the case for the Ray Wylie Hubbard-written Last Rites of Ransom Pride movie starring Dwight Yoakam and Kris Krisstofferson, who also appeared in Bloodworth; another film beleaguered with distribution issues and bad reviews.

What neither of those movies had was the strength of a true to life story like The Last Ride. Based loosely around the last 48 hours of the life of Hank Williams, The Last Ride takes you on the ill-fated road trip beginning in Alabama, and ending in West Virginia where Hank Williams passed away on New Years Day, 1953. Though Hank’s name is never spoken in the movie, it’s taken as a given that you know who he is, and what fate awaits him. Hank is played by Henry Thomas (the kid from ET), who has the nearly-impossible task of portraying a man who lives larger than life in the mythos of American music. Though Henry’s visage and tones never quite meet your imagination of a living and breathing Hank Williams, by the end of the film you begin to connect with the emotions that the film portrays, and the emotions Hank must have felt on that fateful trip whether you believe Henry Thomas to be an accurate portrayal of Hank Williams or not.

Those looking for a period piece where every detail of Hank’s final days on earth is laid out with impenetrable accuracy will miss the point of this movie. In many respects Hank Williams is not the main character, it is Silas Combs (Jesse James), Hank’s 19-year-old driver and travel companion. But there are little nuggets of interesting Hank Williams history embedded throughout the movie that the learned Hank Williams fan will pick up on and enjoy. And despite a small budget, director Harry Thomason did a heck of a job scrubbing out any and all anachronisms in the movie, leaving the viewer smack dab in 1952 right before New Years. 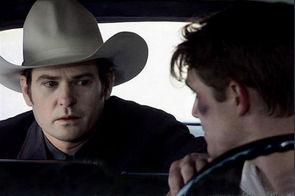 The relationship between these two lost souls—the superstar on death’s door and the confused young man—is the centerpiece of The Last Ride. But moderate writing that generally lacked any true, gut-punching lines, and a few low budget distractions like the projected back window of a car ride instead of actual footage from a moving car somewhat saddle this movie from reaching the full potential of portraying the moments with the true weight of the actual events. Hank and driver Silas Combs are thrust into numerous scenes along the way meant to expose internal dialogues about the characters, but aside from a few special moments, they tend to be too short and feel too contrived to render any serious aid to your ability to suspend disbelief.

But as the movie progresses and Hank’s health deteriorates, The Last Ride delivers some truly poignant moments that evoke the heaviness of the situation evolving in the characters. Silas Combs shares a brief, but intimate moment with Kaley Cuoco (Big Bang Theory) on New Year’s Eve. At one point Hank looks out from the back of his powder blue Cadillac and sees a group of very young boys passing a liquor bottle and smoking a cigarette, and seems to identify with the tragic narrative that he’s slowly becoming the final outcome of. Though these moments may take a little too long to develop in the movie, they make The Last Ride at least worth the 100-minute investment for people whose personal histories hold the name “Hank Williams” in high regard.

The soundtrack is handled mostly by other artists covering Hank Williams songs, with some contributions of other non-Hank artists here and there. Though this may irk some Hank fans, they should understand that with small budgets and the prohibitive costs of the licensing of original music, using actual Hank songs may have been financially impossible. Aside from the central story surrounding Hank Williams, this doesn’t really feel like a musical movie as much as an exploration into the human condition told through a historical interpretation.

Though the Hank Williams story is one of the most intriguing American tragedies in history, it remains woefully untapped by Hollywood and the rest of the movie industry in an era that seems to be anemic in engaging narratives. Though The Last Ride makes some headway in helping to cover the Hank Williams storyline, and specifically his final days, it leaves the viewer a little wanting, while that one definitive film that rises to the mystique of Hank Williams himself remains elusive.

In this powerful tale you’ll never forget, country music’s original bad boy, singer-songwriter Hank Williams, embarks on a remarkable journey that leads straight into the heart and soul of the legendary performer. The man, the myth and the music come together when Williams travels from Alabama to a series of New Years shows in West Virginia and Ohio…and takes one last shot at redemption.

At the end of 1952, with the best years of Hank Williams’s career behind him, he hires a local kid to drive him through the Appalachian countryside for a pair of New Years shows in West Virginia and Ohio.